EXCITING START TO THE NEW TERM

A team of our talented Year 6 footballers travelled to Watford FC to take part in a training session with a competition at the end.

Our team played magnificently and stole the show winning the whole tournament and having a thoroughly enjoyable day at WFC. 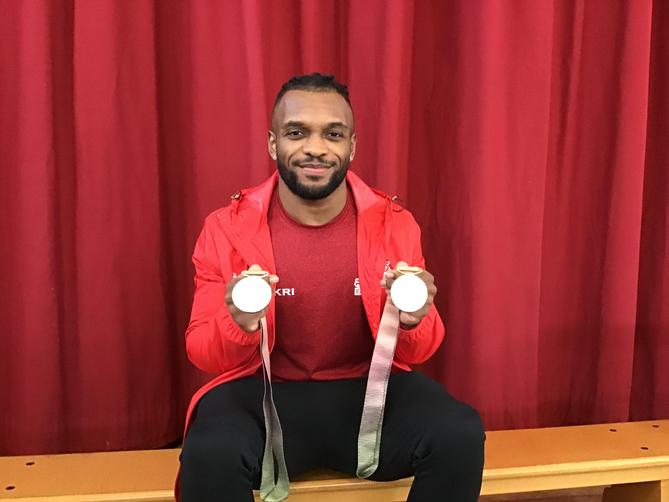 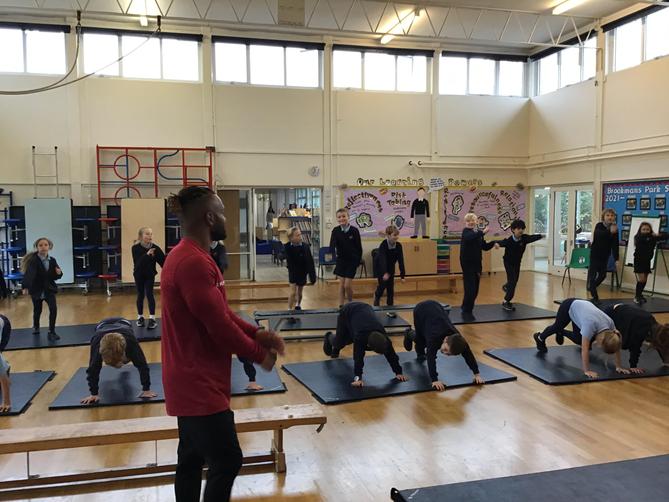 In November we were lucky enough to be visited by Courtney Tulloch. He is a young, up and coming Team GB gymnast, who has had much success in his first years of competing.

He has won medals in the Commonwealth Games, National Games and World Championships both individually and as part of the GB gymnastics team. His individual event is the rings.

During his assembly he told the children all about his journey in gymnastics and how he got started. He was  incredibly inspiring and the children  watched his demonstration with great enthusiasm.

He even performed some stunts on the stage and did a front flip over Mrs Zerny, Miss Kropman and Mr Neiman.

The children were able to look closely at his medals and ask him questions about hi training and competitions.

During his visit each class carried out a range of fitness exercises with Courtney, and the children collected sponsorship to take part in the exercises and great fun was had by all!

(Please see below for sponsor details 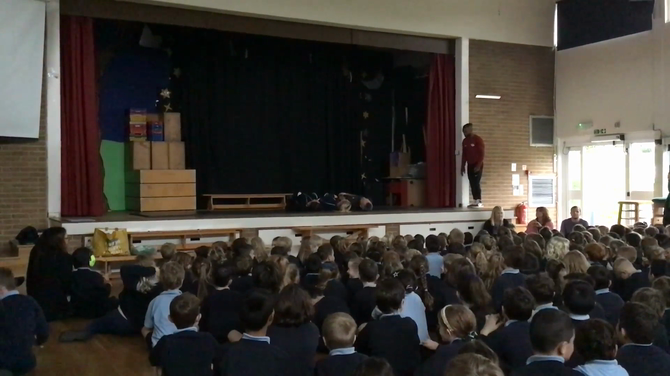 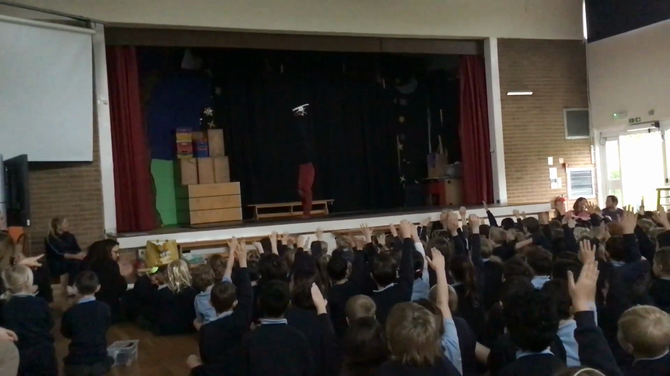 £4500 Raised by our amazing children!

An enormous thank you to all the parents an children of BP for the amazing amount raised during Courtney Tulluch's visit in November.

40% of the money raised goes towards training for young gymnasts in Team GB and 60% goes towards sporting equipment for the school.

We intend to purchase some new gymnastics equipment to update the existing resources we have and be able to enhance the experience of gymnastics in school for our children.

Thank you all again for this amazing effort!

Both the girls and boys teams played very well. Scoring some excellent goals and making some brilliant passes working well as a team and communicating fantastically.

Neither team conceded a game in the group stages and both made it into the final.

The girls played brilliantly, their final was very close, unfortunately they missed out on first place but were rewarded with the silver medal!

The boys successfully won their final and took home the first place medal and will now move on to the South Herts Finals.

Well done to all the children who took part!

On Wednesday 16th November the Netball team took part in this years season opening District competition. The played a round robin set of matches against some really tricky teams. We came away with 2 wins, 4-1 and 8-0 and then one very closely fought lose 0-2.

The girls communicated, passed and worked brilliantly as a team and every member was invaluable.

Two Year 5 teams took part in a Tag Rugby Competition at Welwyn Garden City Rugby Club this week. They displayed some excellent skills, teamwork and determination. Year5 and 6 learned Tag Rugby last half term as part of their PE lessons and their knowledge and understanding of the game really showed.

They worked well together and played in two separate teams securing some fantastic points and wins.

The Year 5's from our netball club took part in a fixtures afternoon at Stanborough School. It was their first match and they played brilliantly. They put in so much effort and made some excellent passes. Well done girls I can't wait to see how you progress over the next few months!

Some of the Year 6 children from our Tag Rugby Club took part in a Welwyn Hatfield competition on Thursday and thoroughly enjoyed the afternoon. Trying out our new rugby kits they played excellently. Coming second overall and narrowly missing out in a nail biting final to St Michaels.

We are looking forward to the next competition, in November, where the rest of the Tag Rugby Club will also be able to showcase all the fantastic tactics and gameplay they have been learning.

Last week all the Year 6 girls went to Monks Walk to celebrate 'Girls in Sport' as part of the This Girl Can initiative. They were the given the opportunity to play a variety of games and try new challenges. The had a great day and all thoroughly enjoyed themselves.

On Tuesday 11th some of our Year 5 and 6 boys attended the latest Monks Walk Football Fixtures Afternoon.

They played really well as a team and made every effort to gain a positive result. Unfortunately on this occasion they lost 0-1, 0-1 and 1-2. They outcome was a close and the boys were unlucky with the results as each match could have gone either way.

Well played boys, we are proud of your fantastic teamwork and resilience!

Some of our Year 3 and 4 children took part in an Indoor Athletics Festival at Stanborough School this week. The carried out different track and field events and performed brilliantly under the noise and pressure of the sports hall.

We won many of the track races in both the boys and girls events and did a fantastic job representing our school in the field events too.

Well done to our Star Performers Jack and Amelia who won every event they took part in and scored the highest for the speed bounce and static jump of the day out of 150 children.

Well done to all the children who took part, what a fantastic team effort!

Today Year 5 travelled to Monks Walk School and took part in a Tag Rugby Festival. They all had the opportunity to play in lots of matches against other schools from the area. They all supported each other, cheered each other on and worked hard to make good tactical choices to help their team results. There were a mixture of wins, losses and draws and a good time was had by all. Well done everyone for representing the school so fantastically.

After successfully competing in a running competition at Monk’s Walk a few weeks ago, a group of our year 5 and 6 children took part in the district cross country finals at Stanborough on Wednesday.
Year 5 formed part of the Monk’s Walk team which worked together to bring the team to victory against three other strong teams! Special mention to Johnny for coming first in boys race and Ellie who came third in the girls race.
The Year 6 races were of a more individual nature. Well done to Francesca and Tegan who ran very well on a difficult course. Luke came second against some strong competition and will be invited to the next county stage.
All the runners deserve praise for taking part and representing Brookmans Park so admirably.

Well done to our Year 3 and 4 Boys and Girls Football teams who took part in the Wroxham Football Competition this week. You all played fantastically. The boys made it to the semi-finals, working together fantastically as a team and just missing out on the finals. Th girls played with such enthusiasm and showed amazing resilience in every game. Well to done all!

The girls football A team travelled to The Wroxham in Potters Bar this afternoon to take on their fellow strongest A teams from across the district. This fine elite included: Cranborne, Cuffley, Ladbrooke, Little Heath, Oakmere and The Wroxham.

Despite being in the 'group of death'(!), our plucky girls topped this (after a particularly tough 0-0 draw with Cuffley thanks to Bella's goalkeeping prowess and an incredible 6-0 victory against Cranborne with 5 (yes, FIVE!) goals from super striker Jasmine and a single from Evie). In a superb display of football, our semi-final was brilliantly battled against Little Heath. Wonderful midfield teamwork from Ellie, Mila and Tegan contributed greatly to our 2-0 win, with both goals scored by our Captain Fantastic, Evie.

In the final, we were pitted against The Wroxham, who were keen to win as tournament hosts. Despite them throwing everything against us, wonderful defensive work from Fran and Hannah retained our clean sheet. Meanwhile, in what can only be described as a 'wonder goal', we took the lead thanks to the exceptional combination of Evie's pinpoint pass and Jasmine's intelligent run to finish with aplomb. A further two goals soon followed courtesy of Evie, and Bella ONCE AGAIN kept a clean sheet in goal to ensure our 3-0 score line upon the final whistle.

With no goals conceded, a draw and all the other games resulting in wins, we joyously held the trophy aloft. What a fine start to the competitive season, girls! 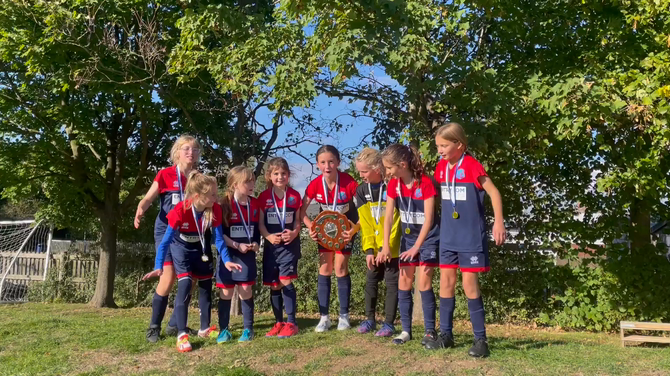 Our Year 5 boys took part in the first Football  fixtures afternoon at Monks Walk School this week. They played brilliantly and worked really well as a team. Winning 1, drawing 1 and losing 1. A great start boys!

This week a group of our Year 6 children took part in an Athletics Competition at Gosling Sports Centre. They competed in sprint heats, sprint finals and relays.

The children worked really hard and put in every effort to get great results in their races. Their teamwork was amazing and they supported each other brilliantly.

The girls did really well but unfortunately just missed out on a medal place. The boys however won 1st place overall with Harry and James both placing in medal positions in their individual races.

The Netball Club took part in the first netball fixtures event of the year this afternoon and made a fabulous start to the season. In their first games against other schools in 12 months the girls worked really hard, co-operated as a team and supported each other brilliantly. They played 3 matches. Winning 2 and losing 1.

The results were as follows:

Year 5 had a fantastic afternoon at Monks Walk Running Festival.

All the children ran in either the competitive race or the Fun Run and put in an amazing effort. We came 1st overall and all the children contributed to our winning result.

Ellie, Johnny, Hunter, Pantelis and Archie and have also qualified to continue to the Welwyn Hatfield running finals next week.

Eliza came 3rd in the Fun Run event and smiled all the way.

We also took 3 elite Year 6 runners, Luke, Francesca and Tegan, who all qualified for the next stage of the finals.

Well done to Olivia for her Best Effort Award and Finley for his Star Performer award.

Well done everyone in Year 5. What an amazing way to start the year!